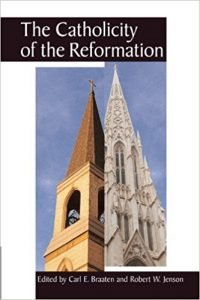 In the section Structures of Authority in his essay, The Problem of Authority in the Church, Carl E. Braaten argues that the Reformation was catholic in the way it viewed the relationship between Scripture and the church. Braaten argues beforehand that the church needs a way to identify and denounce heresy; to do so there needs to be an accredited standard of biblical interpretation. The reformation, according to Braaten, held together the Church with its dogmas and confessions in an authoritative relationship with Scripture. His argument is not clearly delineated, but his points can be gathered under three heads with a concluding application.

First, Braaten asserts that Scripture and the church in Reformational thought have a symbiotic relationship. Both derive from the gospel and work together. Scripture exists for the sake of the church, but the church provides the necessary interpretive grid for interpreting Scripture: thus, the interpretation of Scripture for the church requires the church’s dogmas and confessions. He claims that this is the way the reformer’s understood their principles for biblical interpretation.

Second, in this the Reformers were catholic: their controversy was not over this structure but the emergence of gospel-contradicting traditions that were not subjected to the critique of Scripture. Thus tradition must be subject to Scripture: it is a servant, but necessary nonetheless.

Third, Braaten claims that the reformation, with the catholic tradition, considered the dogmas and confessions of the church to be “a perfectly true distillation of Scripture’s witness to God’s saving revelation in Jesus Christ”: as the consensus of the believing church, these church doctrines are an irreplaceable core of theology that furnishes an interpretive grid for Scripture. The reformers incorporated these principles into their own creeds (e.g., Book of Concord). In this way, the reformers acknowledged that their creeds had subordinate authority to that of the ecumenical creeds and dogmas of the church.

In application, Braaten claims that Protestants need to follow the reformers in implementing this structure of authority, where strong education in historic catholic Christianity provides the heuristic principles for interpreting and preaching the saving work of God attested in Scripture. He makes the point that such preaching will practice both affirmation and condemnation, thus serving to address the problem of heresy.

Braaten makes claims about the Reformers that the evidence he gives doesn’t necessarily support and which many conservative evangelicals will be wary, yet I found his point significant because the general picture he draws is relevant for contemporary epistemological crises in the Protestant church.

He claims almost inerrant authority for the creeds and church dogmas: “they are a perfectly true distillation of Scripture’s witness to God’s saving revelation in Jesus Christ” (62). This is, to me, troublesome on a few counts: first, it is unclear what he has in mind when he speaks of “church dogmas” and which counsels he intends. Second, nothing in Scripture suggests that such counsels are infallible and “perfectly true,” nor—to the best of my limited knowledge—do any of the counsels claim this for themselves (Schaff notes Chalcedon does so for Nicaea); thus there is no basis for such a claim in either of the primary authorities for which Braaten contends.  Third, depending on what counsels he has in mind, many of the essential components of the saving revelation of God in Scripture are absent from the creeds, so “perfectly true” as they may be, they don’t qualify in themselves as a distillation of God’s witness in Scripture. The last point that I believe to be disagreeable is the implicit point that the authority of Scripture lies in the Gospel it contains, and that this alone is its authoritative message (61-62).

Those caveats aside, I think his point about the structural relationship of Scripture to the teaching of the church is significant for the church today. The essential context for the application and interpretation of the Scriptures is the church and its tradition: the worldview received through the church’s teachings provides the vital lens for interpreting Scripture. From a conservative evangelical and, as I understand, a Reformation point of view, this need not be at the expense of a inerrantist Biblicism—the claim that all Scripture is God’s very words free from error and absolutely authoritative. From such a perspective, the structural relationship is a spiral: tradition gives the lens necessary to interpret Scripture but Scripture has the authority to hone and crop tradition.