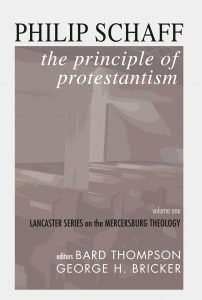 In part one of his book the Principle of Protestantism, Philip Schaff sketches the two-sided (material and formal) principle he sees to be the essential positive element of the Reformation; that is, the progressive element the Reformation contributed to the evolution of the Catholic Church. The second part addresses the relation of this principle to post-reformation developments and the church at his time; it is the first part of his book that is of interest here. As he perceives it, the principle of Protestantism has as its material principle (its substance) the doctrine of justification by faith alone; its other side, the formal or epistemic principle, is the doctrine of Scripture alone, Scripture as the pure and proper source—and certain measure—of saving truth (98). Schaff’s discussion of this formal principle and, especially, its relation to tradition struck me as particularly significant. In this brief, I will outline Schaff’s argument in the first part of this section (ignoring the objections dealt with at the end) and establish his understanding of the relationship between Scripture and tradition, particularly the formal element of dogmatic tradition.

After explaining what exactly he means by justification by faith alone, Schaff moves on to Protestantism’s formal principle, Scripture alone. Schaff explains his understanding of Scripture as the formal principle of Protestantism in three parts (and a fourth in the objections raised against it); first contrasting it with the Catholic coordination (or subordination) of faith and tradition, then explaining Scripture’s four properties as laid down by the 17th century Protestants, and finally explaining the relation between Scripture and tradition.

In contrast with the Protestant understanding, the Roman Church coordinates Scripture with tradition and then subordinates it by making tradition, an originally unwritten divine revelation transmitted by the Church alongside Scripture, the interpreter of Scripture (101-102). Because tradition is that which is recognized by the Roman Church and its institutions, namely counsels and the pope, the essential principle in the Roman Church is the papal hierarchy (102-104). In contrast, the self-interpreting Scriptures are the formal principle and, thus, the highest authority for Protestantism. The church carries within itself truth and error, the latter being progressively cropped by Scripture until the Church is perfected in the Kingdom of God (104-105).

Moving to positive description, Schaff outlines four properties ascribed to Scripture by the 17th century Protestants, three of which are relevant to his exposition of Scripture as formal principle. First, Scripture has normative and originating authority; second, it is perfect in scope and content, containing all that is necessary for salvation, thus all traditions that are extra-biblical are either false or “contain only subordinate and unessential truth” (107); third, the bible is relatively—not absolutely—perspicuous, meaning that each member of the church can understand in the bible all that is essential for salvation (108).

Turning finally to its relation to tradition, Schaff considers tradition under three heads; ritual, historical, and dogmatic. The first two are helpful yet not binding: ritual tradition refers to the orders and manners of worship passed down through the church (111); historical tradition refers to the history of biblical reception (canon) and interpretation that is very helpful yet not binding nor the ground of a Protestant’s faith in Scripture (113).

Considering dogmatic tradition, Schaff considers it, first, under a material principle that the Reformers rightly rejected and polemicized against and, second, a formal principle that was and is indispensable to Protestantism. The material dogmatic tradition is tradition in the “Romish” sense, those teachings attributed to the apostles and Christ that are not found in the canonical Scriptures. The formal dogmatic tradition receives Schaff’s most substantial treatment. Tradition in this sense is not something extra-biblical but the Church’s understanding of Scripture as past on through its rules of faith (“above all the Apostle’s Creed,” 115), ecumenical creeds, and teaching (115-116). It is passed on by the Church and all who are part of the church are steeped in it. This is, according Schaff, a Christian’s first exposure to the contents of the Bible and the way in which its riches are made present to us: it is not separate from but is the contents of Scripture “rolling itself forward in the stream of church consciousness” (116). The Reformers, far from rejecting tradition in this sense, incorporated this tradition into their own confessions and added to this tradition with their distinctive peculiarities (118).